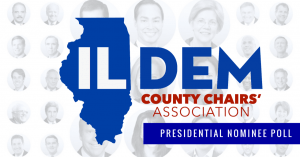 With more than two-dozen well-qualified Democrats running for our party’s presidential nomination, Illinois could be one of the deciding states in who takes on Donald Trump in 2020. It’s been a long time since Illinois was so critical in the presidential Primary contest.
So, who is your preferred candidate? Who would you choose as a running mate? If you could help get that candidate support in an online poll that gets media attention, would you share and promote it?
The Illinois Democratic County Chairs’ Association has a live poll right now asking Democrats who they support, and you need to participate.
Just go to www.ildcca.org/poll to select the candidate you think is best for the Democratic nomination.
It’s simple. It takes two minutes. And, it’s a great way to get some early momentum building for the 2020 election.
Then, share the poll with your friends, family and fellow Democrats. The poll runs through April and results will be shared in early May. So, don’t delay. Start sharing the poll.
Let’s show folks what the IDCCA can do to build the momentum to beat Donald Trump in 2020! Thanks for your help.
By Dan Kovats|2019-06-28T14:36:08-05:00April 15th, 2019|Campaign Training|