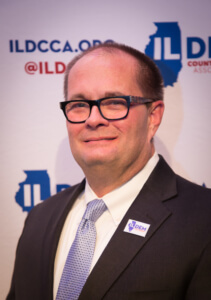 I am a Democrat because, more than anything else, I can’t be convinced that working and middle-class people don’t deserve a strong voice for social and economic justice and equality. In the greatest nation ever conceived, I’m certain that our most successful periods have come through attracting and unifying diverse scores of regular citizens who seek a common-sense balance between “haves” and “have nots.” And, for nearly a century, the Democratic Party has led on the idea that our nation is stronger, together.

Compare that to today’s leaders of the Republican Party and the ideas they promote. To grab power in economic and political circles, Donald Trump and Bruce Rauner have relied on cold-blooded, almost reptilian division. Some days they’ll blame immigrants or claim organized labor is the root of our problems. Without a shred of logic, they demonize climate scientists and devalue high school students who demand attention on assault weapons.

I’ll give Republican Party leaders credit for consistency because their core message never deviates: “Look over there! Don’t let your guard down on your neighbor. He’s your problem.”

The Democratic Party embraces diversity. Look no further than the statewide ticket that Illinois Democrats are offering our nearly 13 million citizens. For 2018, we have the most qualified candidates who, better than ever before, reflect the melting pot that is our state.

The Illinois Democratic Party ticket presents a balance that doesn’t stop at diversity of color, gender, geography or religion. JB Pritzker, Juliana Stratton, Kwame Raoul, Jesse White, Susana Mendoza and Mike Frerichs each bring a different perspective and different achievements to the table. It’s something each of us should be very proud of.

At the core of our diverse ticket is a common, unbreakable philosophy: There is nothing so wrong with Illinois that all of us – together – cannot fix. The 2018 Democratic team has vision that we can do big things, starting with an end to Bruce Rauner’s failed economic experiment that pits neighbor against neighbor.

Think about it, wouldn’t it be nice to have a team of leaders who want to take charge and truly believe that Illinois’ best days are right ahead of us? That’s our ticket.

As Democratic Party activists, each of us has an enormous responsibility to see to it that we capture what many are predicting is a “Blue Wave” in Illinois. For precinct committeepersons, it means you’re going to have to get out – right now – and start to work your neighborhoods. Already, the IDCCA is aware of hundreds who are doing just that.

For us at the IDCCA, we’re focusing harder than ever to expand training and outreach to Democrats all over the state. We’re determined to fan the flames of momentum and capture the excitement that scores of Illinoisans have expressed.

In fact, our initiative to recruit Democrats to step up to the plate and challenge nearly 400 unopposed county-level Republicans is proving to be a remarkable success. Already, Project Blue Wave has engaged hundreds of potential candidates who are readying themselves to join the 2018 ticket and take on Republicans who have remained silent while Bruce Rauner has short-changed and damaged countless communities throughout Illinois.

Project Blue Wave remains an ongoing effort and, perhaps, you’re up to the challenge. To determine possible vacancies in your area, get started by checking out our Project Blue Wave Website.

The Illinois Democratic County Chairs’ Association is working harder than ever to help get Democrats across the victory line in November. You are the foundation of that effort. Our 2018 Democratic Ticket needs your support and Democrats who’re running in your county need the support of your neighbors and friends. I’m confident you won’t let these opportunities wither away.

Stay engaged. Stay active. Stay enthusiastic. Big things are ahead for Illinois. Because we’re all stronger, together.